Biography
Richard John Cyril Allen is the drummer for the English hard rock band Def Leppard. However, he’s more famous for overcoming the complete amputation of his left arm and continuing to play for the band.

Allen was born on November 1, 1963 in Dronfield, Derbyshire. After years of banging on his mother’s countertops and denting the wood furniture, Allen’s mother agreed to get him a drum kit at the age of ten on two conditions – that he pay for half, and that he take lessons and stick to them. Sticking to them he did, as he joined his first semi-pro band at the age of 12. 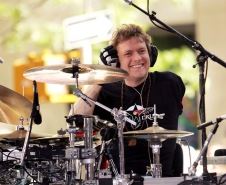 A few days after his 15th birthday in 1978, he saw an ad in the newspaper titled “Leppard Loses Skins” from a local band who were in need of a drummer. Ricked asked his mom to call so he could audition. When he was offered the job, he dropped out of school the next year in 1979 to become the permanent drummer. Just a few months later, the band received their first record deal, and his father had to sign the contract as he was still only 15.

Things were going well for Allen until December 31, 1984 when he was involved in a street-racing accident. Then 21 years-old, Allen was driving to a family party when he lost control of his car, which sailed over a stone wall and into a field. He was thrown from the car, with his left arm severed because the seat belt was not properly fastened. The car ended up upside down, with his then girlfriend, still inside with no serious injuries. Allen however, was transported to a nearby hospital, where doctors initially reattached his arm. Due to infection, it was removed again permanently. He left the hospital almost four weeks later and was back with Def Leppard in the Netherlands two weeks after his release.

Depressed at the thought of being unable to play drums again, Allen built a custom drum set that he still uses today. Instead of a normal drum set, Allen now has a series of foot pedals that allow his left foot to do the job that his left arm did. Allen made his post-accident debut in 1986. In August 1987, the band released their fourth album, Hysteria which went on to sell over 20 million copies.

Outside of music, Allen and his wife Lauren, are the co-founders of The Raven Drum Foundation to serve, educate, and empower veterans and people in crisis. The nonprofit charity partnered with Wounded Warrior Project beginning in 2005 to reach out to soldiers returning as amputees. He also co-hosts “Resiliency Radio” to help inspire people during difficult times.
Get Started
Learn About Our Services
Find a Provider
View Profiles, Videos,
Maps & More
Recreation
Participate in Activities
for Children & Adults
Report Abuse
Report Incidents of
Abuse & Neglect
Government Websites by CivicPlus®
[]