Biography
Robin McLaurin Williams was an American actor and comedian who rose to fame as the alien Mork in the TV series Mork & Mindy. Over his career, Williams has won one Academy Award and four Golden Globes as well as two Screen Actors Guild Awards. All of his success however, began only after he overcame the shyness he associated with his ADHD.

Williams was born on July 21, 1951 in Chicago, Illinois. Growing up both in Michigan and California, Williams was a shy child from undiagnosed ADHD. He joined the drama club in high school, where he finally started to overcome his shyness. Graduating, he was named “the most likely not to succeed.” After graduating, Williams was one of twenty students accepted into the freshman class at Juilliard in 1973. He was also one of only two students (Christopher Reeve was the other) accepted into the Advance Program. Excelling in dialect, he left the school in 1976. 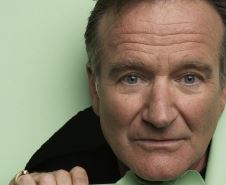 Following his departure from Juilliard, Williams was cast as the alien Mork on the hit TV series Happy Days. Improvising much of his dialogue and physical comedy, his appearance was so popular that it led to a spin-off sitcom Mork & Mindy which ran from 1978 to 1982.

Outside of television and his comedy routines, Williams found even greater success on the silver screen. He was nominated for his first Academy Award for the 1987 movie, Good Morning, Vietnam, where he won the Golden Globe. He garnered his second Academy Award nomination in 1989 with his role in Dead Poets Society. In 1991 he won another Golden Globe for his role in The Fisher King, followed by the Disney cartoon Aladdin, where he voiced the Genie in 1992. The following year, Williams created one of his most beloved roles for the movie Mrs. Doubtfire, winning another Globe. He won a SAG award in 1996 for the movie The Birdcage, and won his Academy Award for Best Supporting Actor in 1997 for his role in Good Will Hunting.

Outside of work, Williams was an avid video gamer, and enjoyed professional road cycling, owning more than fifty bicycles. He lended most of his time to charity work, including the Comic Relief efforts that he, Billy Crystal, and Whoopi Goldberg host. Williams has performed several times with the USO for U.S. troops stationed in Iraq and Afghanistan, and also actively supported St. Jude Children’s Research Hospital.
Get Started
Learn About Our Services
Find a Provider
View Profiles, Videos,
Maps & More
Recreation
Participate in Activities
for Children & Adults
Report Abuse
Report Incidents of
Abuse & Neglect
Government Websites by CivicPlus®
[]