Biography
Stephen Hawking is a British theoretical physicist, cosmologist, and author. He is an Honorary Fellow of the Royal Science of Arts and a recipient of the Presidential Medal of Honor, achieving his success while having ALS, also known as Lou Gehrig’s disease, a condition that has left him almost entirely paralyzed, speaking from a speech generating device.

Hawking was born on January 8, 1942 in Oxford, England. Growing up, Hawking came from a highly intelligent and eccentric family that read in silence at meal times. Attending the alma mater of both his mother and father, Oxford, Hawking studied physics and chemistry. 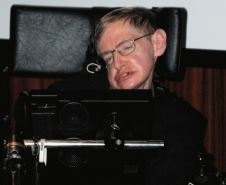 Being one of the youngest at 17, Hawking had a lonely first year, and later went to become extremely popular, joining the rowing team. Hawking was bored in class, finding the work easy, and received a first-class BA (Hons.) degree which allowed him to begin his graduate work at Trinity Hall, Cambridge in 1962 where he studied cosmology and mathematics.

During his first year at Cambridge, his health began to worsen, which he traced back to his final year at Oxford where he fell down stairs and had difficulties rowing. His speech was slurred and medical tests showed motor neuron disease, doctors giving him two years to live. Hawking was 21 at the time. He fell into a depression, but his relationship with future first wife, Jane, gave him “something to live for.” Despite difficulty walking and almost unintelligible speech, he returned to his work with much success. By 1965 he wrote his thesis on black holes and the universe, receiving a research fellowship.

During the late 1960s, his physical abilities declined rapidly. He began using crutches and ceased lecturing. He slowly lost the ability to write, and developed visual methods of working. By the end of the 60s he begrudgingly accepted that he needed a wheelchair. However, during this time he and Jane traveled to the United States several times and had their first son, Robert. During the 1970s, his work became public interest, and he had a year-long visiting professorship in Pasadena, California. He and Jane also had two more children, Lucy and Timothy.

Continuing to travel around the world, Hawking contracted pneumonia in 1985, which required a tracheotomy, removing his remaining speech capabilities. He soon received a computer program called the “Equalizer.” Using a switch, Hawking selects phrases, words or letters from a bank of nearly 3,000. Today, he enters data by twitching his cheek muscles. Throughout his life, Hawking has written seven books and three with his daughter Lucy. He has also appeared as himself on episodes of Star Trek: The Next Generation, The Simpsons, Futurama, and The Big Bang Theory.
Get Started
Learn About Our Services
Find a Provider
View Profiles, Videos,
Maps & More
Recreation
Participate in Activities
for Children & Adults
Report Abuse
Report Incidents of
Abuse & Neglect
Government Websites by CivicPlus®
[]