Biography
Stephen Michael Gleason is a former professional football player who retired in 2008 and was later diagnosed with Amyotrophic lateral sclerosis. 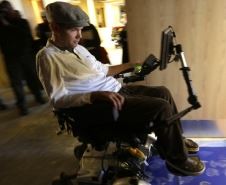 Signing with the Indianapolis Colts as an undrafted free agent in 2000, he was released after the preseason, and was signed to the New Orleans Saints’ practice squad that November. He became a household name in Louisiana on September 25, 2006, when he blocked a punt against the Atlanta Falcons, early in the first quarter of a game at the Superdome. His teammate recovered the ball in the Falcon’s end zone for a touchdown. It was the first score in the Saints’ first game in New Orleans in nearly 21 months, during which time Hurricane Katrina had devastated the city. The Saints won the game and went on to have the most successful season in their history. That year, he won the "Special Teams Player of the Year" award.

After Hurricane Katrina, Gleason formed the One Sweet World Foundation, focusing on literacy and environmentalism. Launching "Backpacks for Hope," Gleason hoped to provide relief to young hurricane victims. He was also known for his long hair, which he regularly donated to "Locks of Love." He retired in 2008 to return to school at Tulane University where he received his Master of Business degree.

In January of 2011, at the age of 33, Gleason was diagnosed with ALS. Going public with his diagnosis that September, he said, "In a way, I see this as an opportunity to continue to be an inspiration, maybe even more so than I ever have been." He set up Team Gleason to help find a cure for ALS. Rather than succumbing to the disease, he jumped out of an airplane for the first time in 2012, directed a documentary, and spoke at the United Nations.

Before the 2013 Super Bowl, Gleason held a press conference, now in a wheelchair and using a voice synthesizer, powered by his eyes. At the event it was announced that he was opening The Team Gleason House for Innovative Living, to fund the development of technologies that will help ALS and MS patients continue living more productive and purposeful lives. It will be the second house of its kind. Speaking without his synthesizer in a PSA ad that ran just before kick-off, starring other famous NFL athletes, Drew Brees, Clay Matthews, Aaron Rodgers, and Joe Flacco, Gleason challenged the world to find a cure for ALS.
Get Started
Learn About Our Services
Find a Provider
View Profiles, Videos,
Maps & More
Recreation
Participate in Activities
for Children & Adults
Report Abuse
Report Incidents of
Abuse & Neglect
Government Websites by CivicPlus®
[]