Biography
Steven Allan Spielberg is an American film director, screenwriter, producer, and studio entrepreneur. Over four decades, Spielberg’s films have covered many themes and genres from science-fiction, to historical events, to war. Growing up, Spielberg found filmmaking as a refuge from his dyslexia which went undiagnosed until 2007.

Spielberg was born in Cincinnati, Ohio on December 18, 1946. Throughout his early teens, he made amateur 8mm “adventure” films with his friends, charging 25 cents for admission, while his sister sold popcorn. In 1958, Spielberg became a Boy Scout and fulfilled a requirement for the photography merit badge by making a film titled, The Last Gunfight. Using his father’s movie camera, he says “That was how it all started.” 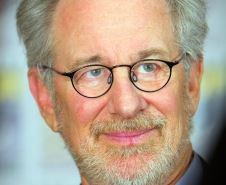 Trying unsuccessfully to attend the film school at University of Southern California twice, he became a student at California State University, but later dropped out (he returned thirty-five years later to finish his degree). Becoming an unpaid intern at Universal Studios, he made his first short film called Amblin’ in 1968. After Universal’s vice-president saw the film, Spielberg became the youngest director ever to be signed for a long-term deal.

Spielberg also co-founded DreamWorks in 1994, which was later bought out by Paramount Pictures in 2005. Returning to television, Spielberg produced Band of Brothers, Taken and The Pacific. Throughout this, Spielberg lived with dyslexia that caused him to learn to read two years later than his classmates. The teasing he experienced was future inspiration for The Goonies, in which he said, “I was a member of the goon squad.” But he says he never felt like a victim of his learning disability. “Movies really helped me, kind of saved me from shame and guilt. Making movies was my great escape.” Over his career, he’s won three Academy Awards, and two Golden Globes along with over 100 other wins and nominations.
Stay Connected
Sign up to receive notifications
Directory
A listing of our staff and how to contact them.
Submit an Event
Have an event to submit for consideration?
Human Resources
Want to join our team? Find out how!
[]