Biography
Stevland Hardaway Morris born May 13, 1950, better known by his stage name, Stevie Wonder, is an American singer, songwriter, and multi-instrumentalist. A child prodigy who developed into one of the most creative musical figures of the late 20th century, Wonder has been blind shortly after birth.

Born in Saginaw, Michigan, Stevie was the third of six children. Being six weeks premature, Wonder received too much oxygen in the incubator, which resulted in his retinas detaching, causing total blindness. He showed an early gift for music, first with a church choir in Detroit at the age of four, and later with a bevy of instruments including; the harmonica, piano, and drums, all of which he taught himself before the age of ten. 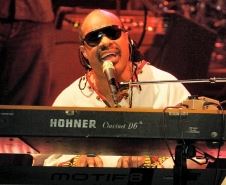 At the age of 11, Steve was discovered by Ronnie White of the Motown band The Miracles. Quickly afterwards, he was signed to a record deal, and in 1962 Stevie released his debut album, Little Stevie Wonder the 12 Year Old Genius. By the age of 13, Wonder had a major hit, “Fingertips (Pt. 2)” which featured him on vocals, bongos, and harmonica. The next year, Wonder made his film debut in Muscle Beach Party as himself. He returned in the sequel five months later, Bikini Beach singing “Happy Street” and “(Happy Feelin’) Dance and Shout,” respectively.

Throughout the mid-1960s, Wonder had a number of other hits including, “Uptight (Everything’s Alright),” “With a Child’s Heart,” and “Blowin’ in the Wind,” a Bob Dylan cover. Suffering a few song failures, Wonder still scored several hits with “I Was Made to Love Her,” “For Once in My Life,” and “Signed, Sealed, Delivered I’m Yours” from 1968 to 1970.

Despite a serious automobile accident in 1973 that left him in a coma for four days and resulted in a partial loss of his sense of smell and a temporary loss of sense of taste, Wonder won 15 Grammys and produced some of his greatest hits in the 1970s, including “Isn’t She Lovely.” The 1980s weren’t as momentous for Wonder, but he did team with Paul McCartney in 1982 for “Ebony and Ivory” and won an Oscar in 1984 for “I Just Called To Say I Love You” which was written for The Woman in Red.

Over the course of his long career, Wonder has won 25 Grammys, as well as a Grammy Lifetime Achievement Award. He was elected into the Rock and Roll Hall of Fame in 1989 and was recognized with the Second Library of Congress Gershwin Prize for Popular Song in 2009. On the subject of his blindness, Wonder has said, “Just because a man lacks the use of his eyes doesn’t mean he lacks vision.”
Get Started
Learn About Our Services
Find a Provider
View Profiles, Videos,
Maps & More
Recreation
Participate in Activities
for Children & Adults
Report Abuse
Report Incidents of
Abuse & Neglect
Government Websites by CivicPlus®
[]