Biography
Taylor Morris is an American veteran of the Afghanistan war serving in the Navy EOD (Explosive Ordinance Disposal) and a Purple Heart recipient. During his first tour of duty, Morris stepped on an IED (Improvised Explosive Device), losing all four limbs. Determined to regain as much normalcy as possible, Morris has gone on to learn how to walk, run, snowboard, cook, drive a car, and more in less than a year since the accident. 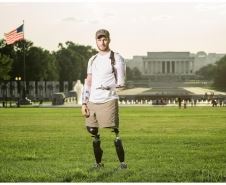 Morris was born on October 16, 1988 in Cedar Falls, Iowa. An avid sportsman, Morris wrestled in high school, making it to the state championships. Graduating in 2007, Taylor joined the Navy, finding his passion as a Navy EOD tech. After rigorous training, Morris graduated in 2009, and was stationed in Virginia Beach to continue his education. In January 2012, Taylor was deployed for his first tour to Afghanistan, set to return in August. However, on May 3, 2012, Taylor was injured in action after stepping on an IED. Sustaining injuries to all four limbs, Taylor lost both legs, his left arm from the bicep down, and his right hand. Remaining conscious the entire time, Morris made the crew clear the area before coming to rescue him. Waiting around 20 minutes, the medic finally reached him to administer combat casualty care. Arriving back in the United States three days later, he began the long and arduous process to recovery.

Becoming the fifth surviving quadruple amputee, Taylor took his challenges head on. Just two weeks after the accident, Taylor had learned how to feed himself, and was fitted for his first prosthetics within the first month. A month later, he walked for the first time with the first of many prosthetic legs. In the coming months, he showed no signs of stopping, learning how to dress himself, cook, run, snowboard, carve pumpkins, tie knots, and drive. Five months post-accident, Taylor took his first spin in an adapted car before getting his own car in January of 2013. Already an inspiration to thousands, Taylor has appeared on the Today show alongside his girlfriend, Danielle, who documents his daily progress on his website. He has attended several events like the Inauguration, the X-Games, and the Super Bowl. Currently, Taylor is waiting to gain entry onto the hand-transplant list through John Hopkins.

Through all of his struggles and hardships, Taylor has kept a positive and inspiring attitude, saying, “I chose this path, and I knew it was dangerous going into it. And it’s unfortunate that it happened. But I don’t want them to pity me or to feel bad. I’m doing fine, and I’ll do whatever it takes to get back to 100 percent.”
Get Started
Learn About Our Services
Find a Provider
View Profiles, Videos,
Maps & More
Recreation
Participate in Activities
for Children & Adults
Report Abuse
Report Incidents of
Abuse & Neglect
Government Websites by CivicPlus®
[]