Biography
Temple Grandin is an American doctor of animal science and a professor at Colorado State University. Diagnosed with autism at the age of two in 1949, Grandin has gone on to become a bestselling author, an autism activist, and creator of the “hug box,” a device to calm autistic children. She’s been listed in the Time 100 most influential people in the world and had Clarie Danes play her in the successful HBO film Temple Grandin.

Grandin was born in Boston Massachusetts on August 29, 1947, and later diagnosed with autism and Asperger’s at two. Growing up, Grandin states she had supportive mentors from nursery school through primary school, but middle school and high school were the worst years of her life. She went on to graduate from Hampshire Country School in 1966 before going earning her bachelor’s degree in psychology from Franklin Pierce College in 1970, a master’s degree in animal science from Arizona State University in 1975, and a doctoral degree in animal science from the University of Illinois in 1989. 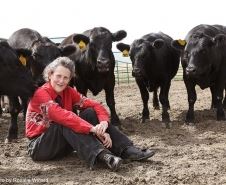 After graduating, she worked as a consultant to companies with large animal slaughterhouse operations, advising them on ways of improving the quality of life of their cattle. Well known for her work regarding animal welfare, neurology and philosophy, Grandin’s essay “Animals Are Not Things,” is still widely popular as her argument states that animals are technically our property, the law still grants them certain key protections. She’s written six books, two of which were about animals. In 2009 she was named a fellow of the American Society of Agricultural and Biological Engineers.

HBO released a film entitled Temple Grandin, starring Claire Danes in 2010, focusing on her life. It was nominated for 15 Emmys and received five awards, including Outstanding Made for Television Movie and Best Actress in a Drama. Grandin was on stage as the award was accepted and spoke briefly to the audience. Grandin has spoken out against a cure for the whole autism spectrum saying the world needs all kinds of minds, and things she’s discovered wouldn’t be possible without her autism. Speaking at a TED convention in 2010, Grandin said instead of trying to change the children with autism, they should be embraced and nurtured into reaching their fullest potential.
Get Started
Learn About Our Services
Find a Provider
View Profiles, Videos,
Maps & More
Recreation
Participate in Activities
for Children & Adults
Report Abuse
Report Incidents of
Abuse & Neglect
Government Websites by CivicPlus®
[]