Biography
Thomas Alva Edison is known as one of the most prolific American inventors, as he overcame a learning disability and near total deafness. Born February 11, 1847 in Milan, Ohio, he was called “The Wizard of Menlo Park.” He is the Founder of General Electric, a leading global industrial empire, pioneer of electricity, broadcaster, self-proclaimed inventor of the telephone, film and sound recording. 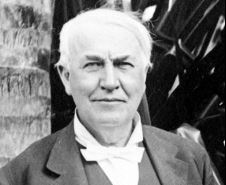 In 1853, at the age of 7, his family moved to Port Huron, Michigan, where his teacher considered him as hyperactive and stupid because he was too curious, asked to many questions and was a slow learner. Unable to focus and terrible at mathematics as well as having difficulty with words and speech, his mother removed him from school and decided to home school him instead. Despite his poor performance in school, he proved to be extremely intelligent at home.

Edison caught scarlet fever at the age of 13, leaving him almost deaf, a handicap that would strongly influence his behavior, his career, the focus of his work, and desire to improve humanity. This motivated him for many of his inventions.

The first notable invention was the phonograph in 1877. From there he founded 14 companies, registered 1,093 patents, and employed over 35,000 people in an industrial empire that allowed the growth of electricity in the world. His hard work in life to overcome his learning and physical disability gave Edison a quote that is echoed throughout the world still today, “Genius is one percent inspiration and 99 percent perspiration.”
Get Started
Learn About Our Services
Find a Provider
View Profiles, Videos,
Maps & More
Recreation
Participate in Activities
for Children & Adults
Report Abuse
Report Incidents of
Abuse & Neglect
Government Websites by CivicPlus®
[]