Biography
Tim Howard is an American soccer player who plays as a goalkeeper for the English club Everton, and on the United States national team despite having Tourette’s syndrome. From 2003 to 2007, Howard played for the most famous team in the world, Manchester United, and was voted the best goalkeeper in the Premier League in his first season with them and became the first American to earn a winner’s medal in the FA Cup. 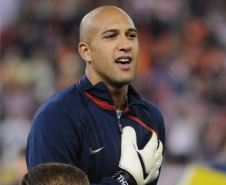 Born on March 6, 1979 in North Brunswick, New Jersey, Howard showed potential in basketball and soccer early in life. In the sixth grade he was diagnosed with Tourette’s syndrome after his mother noticed the symptoms associated with obsessive-compulsive behavior. Growing up as a dominant and popular person in high school that participated in all the sports, Howard said the only thing people could do was whisper things behind his back.

When Tim turned 15, he began playing for the U.S. youth national teams, making his debut against Honduras on the U-17 squad. A month before graduating high school, Howard played in his first professional game. Howard became the youngest player to win the MLS Goalkeeper of the Year award in 2001, recording four shutouts and a league-leading 146 saves, and was named to the MLS All-Star Team. He also received the MLS Humanitarian of the Year Award for his work with children with Tourette’s.

Howard then moved to the European circuit, playing for Manchester United before moving to Everton in 2006. While playing for Everton during the 2011-12 season, Howard became the fourth goalkeeper to score in a Premiere League match with his 102-yard goal.

Constantly asked about how he deals with Tourette’s, Tim states, “Some people believe Tourette’s helps us see what’s going to happen before it really does. I do think it has enabled me to be more alert and to react quickly. Maybe it’s helped me learn how to concentrate more on small tasks. It’s always going to be with me, so I might as well use it to my benefit.”
Get Started
Learn About Our Services
Find a Provider
View Profiles, Videos,
Maps & More
Recreation
Participate in Activities
for Children & Adults
Report Abuse
Report Incidents of
Abuse & Neglect
Government Websites by CivicPlus®
[]