Biography
Tom Cruise is an American film actor and producer. Over the span of his career, he has been nominated for three Academy Awards and has won three Golden Globe Awards. Starring in Hollywood blockbusters, Cruise overcame his dyslexic learning disability to become an in-demand actor.

Thomas Cruise Mapother IV was born July 3, 1962 in Syracuse, New York. Like his mother, Cruise was diagnosed with dyslexia at seven, struggling through school. While he was not an academic success, he focused on athletics and competed in many sports. He played hockey, baseball, wrestling, soccer, and football. Unfortunately, a knee injury sidelined him, ending his pursuit of an athletic career. 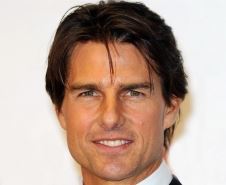 While Cruise could no longer actively participate in sports, he took to acting, appearing in several high school plays. After graduating in 1980, Cruise continued his education, determined to overcome his illiteracy issues. Landing his first roles in acting at the age of 19 in 1981, Cruise still could not read, until he adopted the L. Ron Hubbard’s learning method of “Study Technology.” Talking about this time, Cruise has said, “I had to train myself to focus my attention. I became very visual and learned how to create mental images in order to comprehend what I read.”

After smaller roles in popular Hollywood movies Endless Love (1981) and Taps (1981), Cruise got his break in Risky Business (1983) which grossed $65 million, a role he’s still known for today. Three years later, Cruise confirmed his A-list status with Top Gun which became the highest grossing film of 1986. He backed up the success with performances in The Color of Money (1986), Rain Man (1988), and his Golden Globe winning performance in Born on the Fourth of July (1989).

Cruise continued to impress Hollywood in the 1990s with his Golden Globe nominated performance in A Few Good Men (1992), as well as The Firm (1993), and Interview with a Vampire (1994). In 1996 he starred in his first Mission Impossible, as well as Jerry McGuire, the latter earning him a second Academy Award nomination and Golden
Globe for Best Actor. Cruise earned his third Golden Globe award for his role in
Magnolia in 1999.

Over the last decade, Cruise has gone on to star in Mission: Impossible 2, Mission: Impossible 3, and Mission: Impossible – Ghost Protocol, all to great success. Other successes are Tropic Thunder (2008), and the musical Rock of Ages (2012). Through it all, Cruise has overcome the nearly impossible feat of teaching himself how to read and beat dyslexia.
Get Started
Learn About Our Services
Find a Provider
View Profiles, Videos,
Maps & More
Recreation
Participate in Activities
for Children & Adults
Report Abuse
Report Incidents of
Abuse & Neglect
Government Websites by CivicPlus®
[]