Biography
Vincent van Gogh was a Dutch post-Impressionist painter whose work had a far-reaching influence on 20th-century art. A long-time sufferer of anxiety and epilepsy, he died at 37 from a self-inflicted gunshot wound. In just over a decade, he produced more than 2,100 pieces of art, including 860 oil paintings and more than 1,300 watercolors, drawings, sketches, and prints. 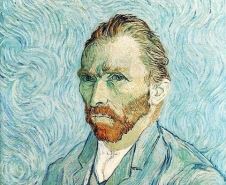 Vincent Wilem van Gogh was born on March 30, 1853 in Groot-Zundert in the Netherlands. Serious and silent as a child, he had an unhappy childhood. It wasn’t until he was 20 and working in London that Vincent experienced his happiest years. He moved several times throughout his life, either working for artists or creating his own artwork. In 1888, after a mental breakdown, van Gogh threatened another post-impressionist artist, Paul Gauguin with a razor blade, later cutting part of his own ear off.

Most known for his self-portraits, landscapes, still lifes, portraits, and paintings of cypresses, wheat fields and sunflowers, Van Gogh began to draw as a child, leading him to his decision to become an artist. He didn’t begin painting until his late twenties and didn’t create most of his best-known works until the last two years of his life.

After his death, his artwork was mounted as memorials throughout Europe and New York, impacting later artists. By the mid-20th century, he was seen as one of the greatest and most recognizable painters in history. Along with Pablo Picasso, van Gogh’s works are among the world’s most expensive paintings ever sold. You’ve most likely seen some of his more famous works; Irises (1889), Self-Portrait (1889), Still Life: Vase with Twelve Sunflowers (1888) and most famously, The Starry Night (1889). Although van Gogh had a less-than happy life, he once wrote his brother Theo saying, “Love many things, for therein lies the true strength, and whosoever loves much performs much, and can accomplish much, and what is done in love is done well.”
Stay Connected
Sign up to receive notifications
Directory
A listing of our staff and how to contact them.
Submit an Event
Have an event to submit for consideration?
Human Resources
Want to join our team? Find out how!
[]