Biography
Whoopi Goldberg born Caryn Elaine Johnson, is an American comedian, actress, singer-songwriter, author, and talk show host. Successful now, Whoopi was less than successful as a child, struggling in school, even dropping out at the age of 17 with undiagnosed dyslexia.

Born on November 13, 1955 in New York City, Whoopi struggled in school, and was labeled “slow,” “dumb,” and even “retarded.” Dropping out of high school at the age of 17, Whoopi knew she was none of those things, finally finding help as an adult. With the help of a teacher, she learned how to overcome her disability. She later said in an interview in 1994, “I knew I wasn’t stupid, and I knew I wasn’t dumb. If you read to me, I can tell you everything that you read. They didn’t know what it was.” 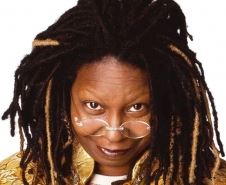 Goldberg’s first onscreen appearance came in 1981-82 in Citizen: I’m Not Losing My Mind, I’m Giving It Away. Taking it to Broadway, the show had a total of 156 sold-out performances in its five-month run. While on Broadway, her performance caught the eye of Steven Spielberg, who offered her the lead role in his film adaptation of The Color Purple. The film was a critical and commercial success and was nominated for eleven Academy Awards, including Best Actress. Although Goldberg didn’t win, she did pick up the Golden Globe Award.

In the late 1980s, Goldberg found her stand-up routine with numerous HBO specials of Comic Relief with fellow comedians Robin Williams and Billy Crystal. In 1990, Goldberg moved to television, starring in Bagdad Café. That same year, she played a psychic in the film Ghost, and became the first black female to win the Academy Award for Best Supporting Actress in nearly 50 years, and only the second black female in Oscar history to win an acting award.

On television, Goldberg played Guinan in a recurring role on Star Trek: The Next Generation. Goldberg also reprised her role in two Star Trek movies. Switching from sci-fi, Goldberg was nominated for a Golden Globe for her role in Sister Act which grossed well over $200 million. Showing her acting prowess, she lent her voice in 1995 in The Lion King and Pagemaster. These would pay off as she later played the voice of Liz on the first four seasons of the popular PBS program The Magic Schoolbus. She also starred in the successful ABC-TV version of Cinderella.

Throughout her career, Goldberg has won an Oscar, two Daytime Emmys, two Golden Globes, a Grammy, and a Tony Award. During part of the 1990s, Goldberg was the highest-paid actresses of all time. For all of this, Whoopi calls herself the real “American Dream” saying, “It said you could come from anywhere and be anything you want in this country. That’s exactly what I’ve done.”
Get Started
Learn About Our Services
Find a Provider
View Profiles, Videos,
Maps & More
Recreation
Participate in Activities
for Children & Adults
Report Abuse
Report Incidents of
Abuse & Neglect
Government Websites by CivicPlus®
[]