Biography
Thomas Woodrow Wilson was the 28th President of the United States. During his presidency, he signed the 19th Amendment and lead the U.S. through WW1. However, many do not know that Wilson didn’t know the alphabet until the age of nine or that he couldn’t read until the age of twelve from dyslexia.

Wilson was born in Stauton, Virginia on December 28, 1856 but grew up in Augusta, Georgia. He was over ten years old before he learned to read, and was considered slow, however, dyslexia was not widely-known at the time. As a teenager, he taught himself shorthand to compensate and was able to achieve academically through determination and self-discipline. 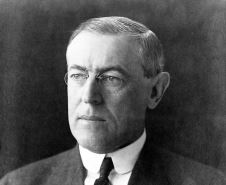 Although he finally learned to read, it remained a struggle for him the rest of his life. Taught by his father in oratory and debate, Wilson enrolled at Davidson College, but transferred to Princeton when his father was hired as a professor. Wilson went on to study law at the University of Virginia and earned his PhD in political science and history at Johns Hopkins University.

In 1890, Wilson acquired his dream job of a professorship at Princeton, going on to become the university’s 13th president in 1902. He was popular on campus, and was renowned for his caring demeanor and high ideals. His first stroke occurred while at Princeton in May of 1906, seriously threatening his life.

Moving past school, Wilson became the 34th Governor of New Jersey in 1910, and served until 1913 when he became the 28th President, winning over William Howard Taft and Theodore Roosevelt, who ran under his own party. During his first term, Wilson signed several acts that are still relevant today including; the Federal Reserve Act, the Federal Trade Commission Act, the Clayton Antitrust Act, and the income tax.

Winning reelection in 1916 by a slim margin, Wilson was no longer able to keep his promise to keep America out of war, and declared war on Germany on April 2, 1917. When the “Great War” was over on November 11, 1918, Wilson proposed the “Fourteen Points” as the basis for the peace treaty at Versailles, with the last point being the creation of a League of Nations to ensure world peace. For his efforts, Wilson was awarded the Nobel Peace Prize in 1920, the same year he suffered his second stroke which left him paralyzed and blind on his left side.

Leaving office in 1921, Wilson retired with his second wife, Edith, to a town house in Washington D.C. An avid lover of cars, Wilson continued his daily drives, and attended vaudeville theater showings on Saturday nights. Wilson died on February 3, 1924 as a result of a stroke. During his life, Wilson wrote several books, including a biography of George Washington, and the five-volume History of the American People.
Get Started
Learn About Our Services
Find a Provider
View Profiles, Videos,
Maps & More
Recreation
Participate in Activities
for Children & Adults
Report Abuse
Report Incidents of
Abuse & Neglect
Government Websites by CivicPlus®
[]